Visit to Lloyds of London 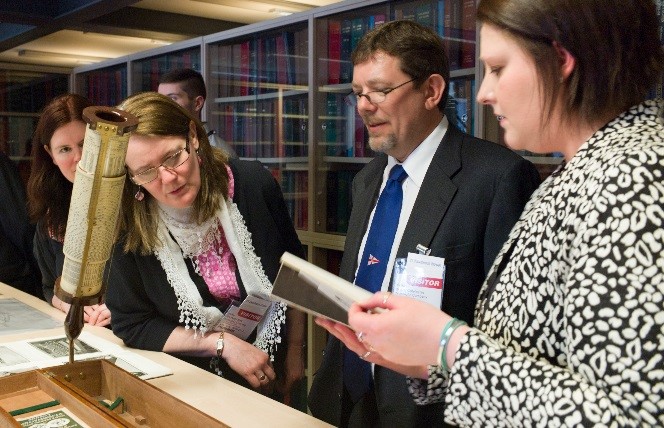 On a sunny Thursday afternoon in early April, a group of intrepid Fan Makers set off to explore the mysterious world of Lloyd’s Register. We assembled in the foyer of 71 Fenchurch Street, where we were most courteously greeted by our hosts, Vicky and Shaun.

Once we had been led down to the archive, we were revived with tea and biscuits before being shown a small selection of historic documents, and a slide rule which no one could remember how to use, we were led off on a tour of the old building. 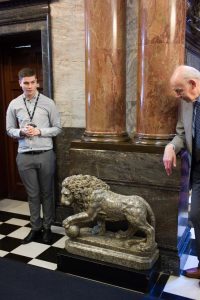 Built with all the elegance of the late Victorian era, the offices were opened in 1901. Stunning neoclassical features highlight the main entrance, guarded by two marble lions. We were all impressed by the grandeur of the old library, with its panelled walks and magnificent ceiling. Heading up the stairs we were shown the two war memorials, and our guide pointed out the glaring error of the sculptor. 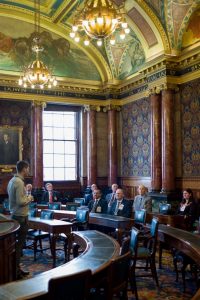 On our way round, we admired the many great paintings, including the ceiling in the Old Chairman’s Office. I in particular liked the portrait of the longest serving chairman, Thomas Chapman, and his chair next to the painting recovered in the wrong colour.

We finished our tour with a brief, but insightful, history of the company and how it has adapted it evolved. After thanking our excellent hosts, and claiming our goodie bags, we reemerged into the sunshine to enjoy the rest of the day.

I would like to thank, Bob Gatehouse and the clerk for organising this successful event for the Livery Committee.