Liveryman Mike Lakin volunteered to undertake the task of organising a four ‘gun’ team to represent the Company. On Thursday 9th May 1996 Liverymen Mike Lakin, Jeffrey Bines, Peter Dove and John Hughes made up the first Fan Maker team at the event. Such was the success of the day, that the Worshipful Company of Fan Makers has entered at least one team in each subsequent year.

Twelve years after this first gathering it was suggested that our group of sportsmen and women should be formally recognised within the Worshipful Company of Fan Makers, but by what collective name should we be known? The views of those liverymen who had represented the Company at the 2008 Inter-Livery Competition were sought and, at the Election Court Meeting on Thursday 23rd October 2008, Mr. Assistant John Hughes was delighted to report to the Court that henceforth ‘we’ would be known as The Shooting Society. The Inter-Livery Competition is the key event of the Society’s year and, though a competitive occasion, the emphasis is very much on participants having an enjoyable day-out. The Shooting Society welcomes shots of any standard and operates on a ‘pay as you shoot’ basis with no membership fee. 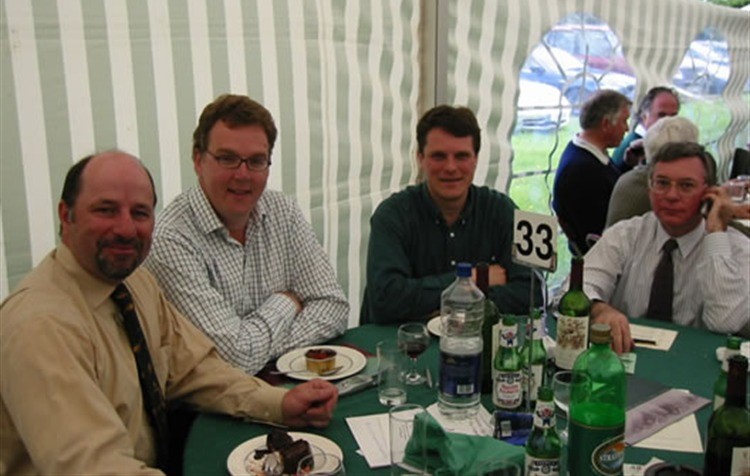 The competition annually raises thousands of pounds for charity and enjoys the support of The Lord Mayor of the City of London. Each year, besides contributing £1,000 to that year’s Lord Mayor’s charity, cash prizes are also awarded to the winner of each of as many as 12 separate classes for donation to a charity of the winner’s choice. Over £80,000 was raised for charity in the first 15 years of competition.

The format for the day is, typically, registration and breakfast from 7.30am with the commencement of shooting at 8.30am. Shooting at two identical ten stand courses plus a ‘flush’ continues through to an excellent buffet lunch, including a hog roast, which is served from 12.30pm onwards. Prize giving and a raffle take place at 3.30pm.The day is expertly organised with minimal delay at stands. The Shooting Society has a tradition of welcoming guests as team members.

The Bodin Cup is presented to the Fan Maker recording the highest overall individual score at the Annual Inter-Livery Clay Pigeon Shoot.

This award takes its name from that of the late Liveryman George Bodin (pictured above), an enthusiastic supporter of The Shooting Society. George, who was admitted to the Livery in 1989, passed away in 2006 and it was the wish of those representing the Company at the 2007 Inter-Livery Clay Pigeon Shoot that his contribution to the success of The Shooting Society be recognised. The Cup, a silver goblet, was generously bestowed to The Shooting Society by Mr. Assistant Peter Dove.

George’s total score at what was to be his last Inter-Livery Clay Pigeon Shoot in 2006 was an outstanding 69 points, which placed him 4th out of 362 individual guns competing that year. This score remains the highest recorded by a Fan Maker at this event.
John Naylor became the first recipient of The Bodin Cup at the 2008 Inter-Livery Clay Pigeon Shooting Competition with an overall score for the day of 56 out of a possible 80.
Past winners of The Bodin Cup are:

The Shooting Society welcomes all who enjoy shooting to join them at the annual inter-livery clay shoot. Other shooting events, both clay and game, are held each year on an ad hoc basis.

There is no membership fee and each event is attended on a pay as you shoot basis. It’s all about enjoying the day and whatever your standard of shooting (and it varies enormously!) you’ll fit in.

If you are interested in joining other Fan Makers and their guests at one of The Shooting Society’s events then please contact its secretary: