The Banquet at the Mansion House

As usual the Banquet was a glittering and memorable occasion. The attendance was high and the guests distinguished and numerous. There is no more impressive venue than Mansion House and the Company is doubly fortunate to be able to use it and to do so in the festive season. The Master, the Wardens, the Court, the Clerk, the Beadle and the Mansion House Staff ensured a splendid evening was enjoyed by all.

There is interest wherever one looks in the Mansion House. For any member of the Company reading this who has not attended this function, or has not done so for some time – make a resolution to do so next year. You will not be disappointed.

Making your way up the stairs to the reception the climb past the musketeers in their 17th century uniforms is an experience in itself. If there is a little wait, that’s fortunate because it gives you an opportunity to study a part of the Harold Samuel Collection of Dutch and Flemish 17th century paintings, some of them appropriately seasonal with plenty of ice and snow. The collection was left to the City in 1987 and is probably the best collection of its kind in the country. Quite a start to the evening.

The reception provided an opportunity to chat to old friends and make new ones before going into the breathtaking view of the Egyptian Hall laid out for the banquet. Glittering is certainly the word for that view. Perhaps you wondered why it is called the Egyptian Hall? It doesn’t look very Egyptian. Well, it isn’t. Its design is Roman, albeit based upon Roman buildings in Egypt. The sculptures are Victorian, put in place in 1863. Before they arrived the room was thought to be rather plain.

History was all around us as the Chaplain, a piece of our own history said grace. The food, wine and service were all up to the extremely high standard with which  Mansion House is associated. It is easy to forget the amount of effort which goes into producing and providing a banquet of that quality. All aspects were first class.

Throughout the evening we were treated to musical entertainment, all of it most enjoyable. The Royal Air Force was well represented in the musical programme in its 100th anniversary year. The familiar traditions of the Rosewater Bowl, Loving Cup and Post Horn Gallop followed in their order. The trumpeters were on fine form and the Company clearly appreciated their skill and lung power.

The speeches were all very well received with a good mixture of entertainment and information, the ladies’ and mechanical fans both being concentrated on in equal measure. The Master reviewed his year and rightly stressed the Company’s commitment to the fundamental principles of the livery. The work which the extremely generous Ross Collins bequest enables the Company to achieve was explained – in providing a bursary for an M.Sc. student at Cranfield University and in seeking to ensure the full involvement of fan making in the important Heritage Crafts Association endangered crafts programme. The Master was also able to stress the healthy interest which the Company maintains in its sponsored school, Lansbury Lawrence Primary School in Poplar and the extent of our charitable giving – at a record level.

The Lord Mayor (locum tenens) Sir Andrew Parmley, an old friend of the company was his usual most entertaining self. The glories of the United States of America and Blackpool were both done justice as our minds were firmly distracted from Brexit.

The Foreign Warden stylishly welcomed the guests of whom the principal guest had to be (as a result of illness) a very late substitute – although when she spoke no one would have been able to tell. Dr Hayaatun Sillem is the Chief Executive of the Royal Academy of Engineering and she gave us an insight into the modern world of engineering stressing the importance – often underestimated – of engineering to the national economy. She also reminded us of the under representation of women in engineering, something which needs to be firmly addressed and, perhaps an area where the Company could seek to make a contribution?

As the evening concluded I again noticed a piece of history which attending the banquet had enabled me to see. As is usual the City had put out some of its plate to decorate the tables. Just in front of me was an unusual gilt covered cup. On its lid, enamelled in their proper colours were the Olympic Rings. The cup had been presented to the City by Sir Frederick Wells Lord Mayor at the time of the 1948 Olympics. Sir Frederick was a member of the Worshipful Company of Carmen, next in order of precedence after our Company. I was grateful that I had the opportunity to see that little bit of City history, courtesy of this year’s Mansion House banquet. Don’t miss next year’s. Our Company is a happy mixture of old and most modern. With that in mind, if you want to see Sir Frederick waiving the Olympic flag seventy years ago, use this link!  http://www.onlinefootage.tv/stock-video-footage/19667/14th-summer-olympics-london-1948-olympic-flag-lord-mayor-of-london-sir-frederick-wells 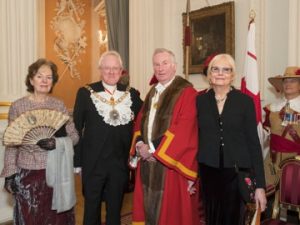 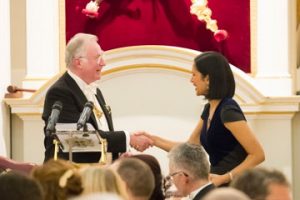