The history of our Masters

Masters of note include Sir James Whitehead, later Lord Mayor of London, whose objectives for his year as Master included education, volunteering and helping the poor. He started the ‘Penny-a-Week’ scheme for London hospitals, where there were 2,500 empty beds. By addressing meetings in shops and factories he collected £50,000 a year for the appeal.

Sir John Bell, made Master in the Queen’s Diamond Jubilee year of 1897, Sheriff in 1901, and Lord Mayor in 1907. He presented the prize-winning lace fan at Queen Victoria’s Jubilee Fan Exhibition, made by Lizzie Oldroyd, to Her Majesty, in recognition of her support for the industry.

William Latchford was Master in 1933, and established the Latchford Prize for students of the City & Guilds of London Institute. To broaden the competition, student schools of the Royal Academy were also invited to participate. In 1970, his son, Norman Latchford, increased the prize from 5 guineas to £50.

Bernard Ross Collins, who was Foreign Warden in 1937, became Master in 1939 and kept the Company alive for four years during the second world war, holding quarterly meetings and contributing considerable energy and gifts to the Company including the Poor Box in 1940, into which went the Court fees which were then distributed to charity. This inlaid silver casket with the Company’s crest is engraved with the names of Liverymen from four generations of his family. He also donated a portrait of Queen Anne painted in 1702 by Michael Dahl, and one of Queen Victoria by Barraud dated 1897. Perhaps his greatest gift was the Royal Presentation and Autograph Fan. In 1941 he founded St Dionis Hall in Lime Street, which became the Company’s home for a decade.

However, he continued after his Mastership to find a more permanent home for the Company, culminating in St Botolph’s in Bishopsgate in 1952 with the help of Alderman Sir Frederick Tidbury-Beer, Warden of St Botolph’s, and who was given the Honorary Freedom of the Company in 1951, and his brother Lesley Ross Collins, Master in 1952. He also donated a very large, bound book in a strong wooden case, to keep reproduction copies of important documents, should the originals be damaged during the war. He bequeathed the Company his collection of fans on his death.

Leslie Ross Collins, as Master in 1952, opened the New Hall with HRH The Duchess of Gloucester and, as his gift to the Company, donated a Master’s Chair, with the arms carved as hands, symbolising the passing of help from past to future Masters. He also gave 24 antique Courtroom chairs in 1964. 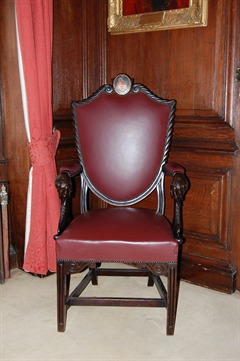