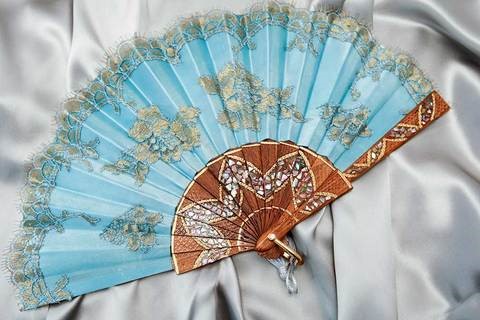 On 30 November 2017, the Free Warden was delighted to exercise the Company’s right to inspect any fan making company ‘within 20 miles round the Cities of London and Westminster’ – Rockcoco Fans.

It is often the case that members of the Fan Makers’ Company are asked why their senior and junior wardens are called, respectively, the Free Warden and the Foreign Warden. The explanation can be found in the Company’s Charter of Queen Anne dated 1709, and no doubt goes back many years prior, with the origins being found in the Guild of Fanmakers’ (as we were then) petition to Parliament in 1670 for relief against ‘abuses and extortions’ in their craft.  As we know, this petition was granted.

The 1709 Charter established the Guild as a corporation which meant it could hold goods and property up to £500 (circa £38,000 in today’s money) and could enter into litigation if necessary.  Furthermore, it set the Company’s area of jurisdiction at “20 miles round the Cities of London and Westminster”.  Indeed, this area was incorporated into the Company’s legal name.  The Charter also enabled the selection and election procedures for a Master, two Wardens, between ten and twenty Assistants, a Clerk and a Beadle.

Under the overall control of the Master the duties of the two Wardens were concerned with matters inside and outside the Company’s geographic jurisdiction and they addressed two major factors which concerned the Company at that time.  Specifically, the Foreign Warden had the task of monitoring and combatting the importation of fans from abroad, and elsewhere in the Country, into London.  The Free Warden was responsible for controlling local fan manufacture and the ‘free’ men and women engaged in the trade.  The Beadle’s task was to “prevent any person intruding into the Art of Mystery of Ffanmakers and the abuses committed therein to the prejudice of the same.”  To assist the Beadle he had a staff or Mace which could be used, as necessary, as a weapon as well as a symbol of authority.  The Mace-head is made of silver and is believed to date from 1697; screwed into its top is a silver model of a folding fan dated 1726.  You will see our Beadle carry it today.

With the Mace in hand the Beadle would accompany the Free Warden when the latter was inspecting any fan maker in the Company’s jurisdiction.  For the first time in over 100 years this is what Dr Michael Smith, the then Free Warden, did on 30th November 2017 by ‘inspecting’ Rockcoco Fans, the first luxury hand fan producer in London since Edwardian times.  But rather than be accompanied by the Beadle with his Mace “and stout right arm” he was joined by Jennifer, the now Mistress Fan Maker.

Rockcoco Fans was founded in 2014 by sisters Denise Frankel and Janis Sher; in 2017 Denise became a Liveryman of the Fan Makers’ Company.  The sisters have a family background of making and supplying luxury fashion accessories for women.  Their grandfather established the brand ‘Charkin Hats’ in London in 1936 supplying ladies’ millinery to boutiques and department stores across the UK and Continental Europe.  Their father then followed in his father’s footsteps joining the family business in the 1940s, and Janis joined the brand during the 1980s.

The sisters have collected and used antique fans for many years but, after considerable research, could not find in the current market any designers and manufacturers providing the same high quality; hence Rockcoco Fans was born.  The brand was named Rockcoco because Denise and Janis felt the name embodied their product – classical with a modern and ‘edgy’ twist.  They provide three fashion collections: Bridal; Bespoke; and Ready-to-Wear. These collections are created by artisans using traditional skills and a deep understanding of the rich history of the fan. Their fans are characterised by attention to detail, luxury materials, elegance and grace. They are made from only the finest quality materials including mother-of-pearl, ebony, fine silks and cottons, ostrich feathers, lace and, in bespoke form, many precious stones if required plus gold, platinum or silver.

On inspection the Free Warden found the quality of the fans of the highest order and so was very happy indeed to give Rockcoco Fans the full endorsement of the Worshipful Company of Fan Makers.  Not surprisingly, Jennifer has added a Rockcoco fan to her collection and will certainly be using it from time-to-time during 2018 and beyond.

A Rockcoco bespoke fan with a frame made of Palo Santo wood inlaid with mother-of-pearl; the leaves are silk-satin edged and decorated with gold Chantilly lace.