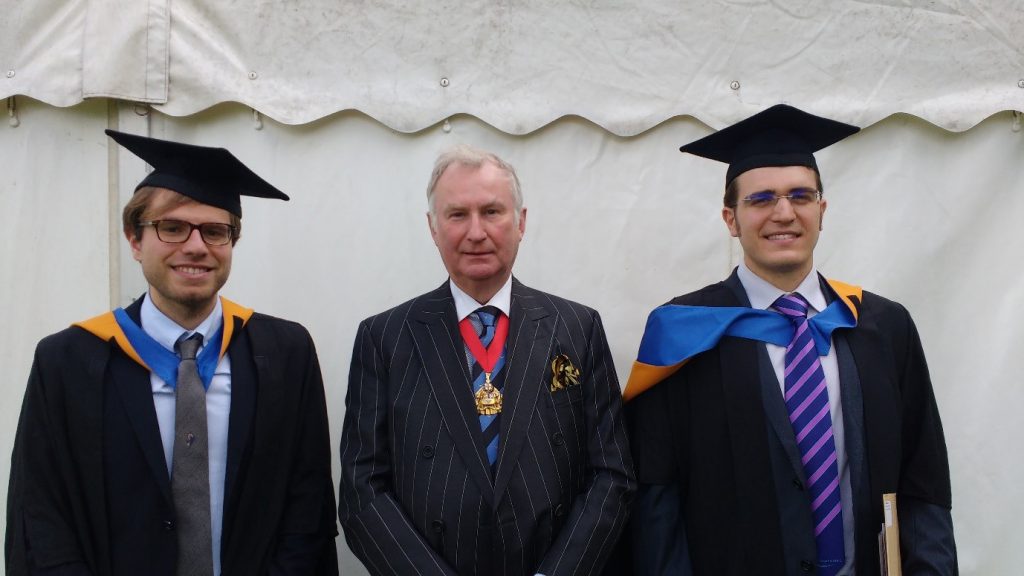 Cranfield is the UK’s only all post-graduate university.  Originally established in 1946 as The College of Aeronautics, its link with the Worshipful Company of Fan Makers dates back to 1954, and was enhanced in 1959 with the inception of Fan Maker scholarships, and later, Prizes. In addition, until 2016 when the organisation of the University was radically restructured, a member of the Court of the Fan Makers was also a member of the University Court.  The focus of the University today is Technology and Management, with a particular emphasis on Aerospace.

On Friday, 8th July 2016, representing the Master Fan Maker and the Company, the Foreign Warden, Dr Michael Smith DProf., a member of the University Court for seven years, attended the School of Aerospace, Transport & Manufacturing to present the Fan Maker Prize in Aerodynamics to Salvatore Ippedico MSc, and the Fan Maker Prize in Fluid Engineering to Marco Vito Portincasa MSc.  With these prizes goes the Honorary Freedom of the Company.

It was a magnificently organised and conducted Graduation Day accompanied by brilliant sunshine and, over a glass of champagne, the Foreign Warden, hosted by Liveryman Professor Mark Savill, was able to spend a considerable amount of time talking with our two Graduands and new Freemen plus, of course, their very proud families.

During the morning the University Chancellor, Baroness Young of Old Scone, conferred over 700 taught and research degrees.  And, whilst each graduand was made to feel it was his or her day, the highlight of the occasion was the conferment of the Degree of Doctor of Science Honoris Causa on Ian King, Chief Executive of BAE Systems, and on Professor Dame Ann Dowling DBE, Professor of Mechanical Engineering, University of Cambridge.

The day concluded for the Foreign Warden with lunch as the guest of the Vice-Chancellor, Professor Sir Peter Gregson, and Lady Gregson, who entertained a small group of guests including Baroness Young, a selection of the most senior University academic and management staff, the two Honorary Doctoral graduands, and a remarkable young man, Dr Thomas Kissinger PhD, who received the infrequently awarded, Lord Kings Norton Medal for his outstanding contribution to the University.

It was a day to remember for everyone!