The first article in this series concluded with a reference to the April Court Dinner where the company not only clothed five new Liverymen, but also celebrated the Centenary of the Royal Air Force with the Master’s Principal Guest and Speaker being the former Chief of the Air Staff, Sir Andrew Pulford.  There was a great deal of ‘light blue’ present including no less than four Air Marshals, the Commanding Officer of the Company’s affiliated RAF squadron, No. 11(AC), the Commanding Officer of our affiliated Air Cadet Squadron, 33(F) and, because the Master was a previous Cadet Warrant Officer in the 1960’s, the Commandant of the Air Cadet organisation.

As a most fitting backdrop, the Master invited Sam Worthington, who is restoring to flying condition Hawker Typhoon RB396, to bring along the cockpit, engine block, and some of its typical armament of as a display.  A painting of the aircraft as it will appear in all it glory is below. The observant may spot a Panther and Mark I Tiger on the receiving end of this formidable ground attack aircraft’s attention. Sam’s grandfather flew such a machine in World War Two. 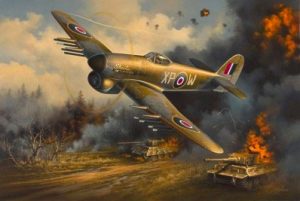 During the remainder of the spring the Master received many invitations to luncheons, dinners, visits, talks and receptions. Especially memorable were dining with the Bakers’ Company in their Hall, with the Honourable Company of Air Pilots in the Drapers’ Hall, and with the Carmen in Regent’s Park Barracks. On that occasion the venue had to be changed at the last minute from the Officers’ Mess to the Sergeants’ Mess because the fans in the Officers’ Mess kitchen failed!

Further visits, talks and receptions included: a presentation and question and answer session by the Lord Mayor in the Chartered Accountants’ Hall, on his principal theme for his year, “Restoring Trust in Business”, a debate on the future of family businesses as opposed to listed businesses hosted by the Distillers’ Company at Bank of America Merrill Lynch, the  Chartered Institute of Business Services Engineers Presidential Address hosted by the Royal Society and attendance at the Lord Mayor’s ‘Visit Day’ to St Bartholomew’s Hospital commencing with Evensong in the Hospital’s 12th century church, followed by a guided tour, and then drinks in the Great Hall.

The Mistress Fan Maker was the guest of the Mistress Turner at the Hurlingham Club where she witnessed a professional demonstration of wood turning. She attended a lunch with the Mistress Lightmonger in Tallow Chandlers’ Hall incorporating a costumed talk by the historian Leslie Smith on Queen Elizabeth I. With other consorts she lunched with the Mistress Management Consultant. Reciprocating, the Mistress Fan Maker hosted fellow consorts at a tour of the Fan Museum led by Freeman Jacob Moss, the Curator, followed by a superb champagne tea in the museum’s Orangery. Tea at the Fan Museum is, of course, highly recommended for the entire livery and their friends.

Additionally, the Master and Mistress attended many events together.  For example: the May Buckingham Palace Garden Party hosted by Her Majesty The Queen, the Cutlers Hallamshire Feast in Sheffield and the ‘Pewter Live’ Exhibition and Reception in the Pewterers’ Hall.  Although that sounds like a continuous round of merry-making, it should not be forgotten that at all times the Master and Mistress are representing the Fan Makers’ Company.

And it was not all wining and dining! There was the May General Purposes and Finance Committee for the Master to chair, and later that month a Livery Committee meeting to attend.  Moreover, in June the Master was involved in the detailed discussion of the design and manufacture of a fan for Her Royal Highness The Duchess of Sussex and, joined by the Free and Foreign Wardens, the interviewing of two prospective Liverymen prior to hosting one of the highlights of the Fan Makers’ social calendar, the Summer Dinner.

That dinner was sold out; there was even a waiting list. Again Skinners Hall was filled to capacity with members and guests, all of whom were, to their surprise, entertained by two unusual ‘waiters’, a baritone and a tenor, who sang a range of songs which had everyone tapping their feet, clapping their hands, and even singing along.

The following day the Master and Mistress left for the Ironbridge Livery Weekend in Shropshire – but that is for Part Three.