The third article in this series starts with the Master and Mistress’s attendance at the Ironbridge Gorge Livery Weekend from 8th. to 10th. June, a superb event bringing together all the Livery and Guild Masters, Prime Wardens and their Consorts, and the Lord Mayor and Lady Mayoress.  For a Master and Mistress Fan Maker it comes fairly early in their year and so is a valuable networking opportunity.  It is also the time when the Masters and Consorts establish, and name, their future Past Masters’ and Past Consorts’ Associations, in the case of 2018, ‘Spitfires’ and ‘Merlins’ respectively.  The President and Vice-Presidents of which are, on the one hand, the Lord Mayor and Sheriffs for 2018, and on the other, their consorts.

The weekend is exceptionally well organised and hosted with a full tour of all aspects of the Ironbridge Gorge Museum (commemorating the birthplace of the Industrial Revolution) and involving two formal dinners in the most amazing surroundings. Many valuable Master-to-Master relationships are initiated during this weekend, and already this Master is taking full advantage of that, both within the Livery and outside.  If Jennifer and I had to select just one highlight from that weekend it would be the visit to the Blists Hill Victorian Town. 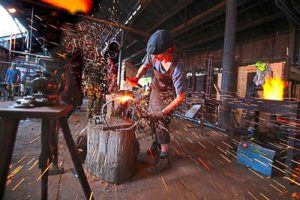 That was a wonderful weekend but being Master is not only about occasions such as that. I  need to rebut the misconception that all the Master does is host, or attend, lunches, dinners and so on. Yes, he or she (and importantly we now have our first lady Assistant) will do this, but there is much more to being Master than just eating and drinking.  With colleagues, and supported by the Learned Clerk, management is the Master’s most important role.

Additionally, the Master chairs the General Purposes and Finance Committee meetings.  There are four of these each year, usually a few weeks before the next Court meeting. This committee is the most significant one within the Company because it is the body that takes the most important management decisions and advises the Court on the policy and strategy. The Master is also an ex-officio member of all other Company committees, such as the Livery Committee, the Recruitment Committee, and the Court Selection Committee and he chairs the Recruitment Interview Panel.

There is, however, one ‘non-company’ committee that he, along with the two Wardens, is also a member of, and that is the Charities Committee.  This committee is independent from the Court, but works with it because, as you will have seen from ‘350 years & Beyond’, charity is a fundamental aspect of all Livery companies.  The Master is a Trustee of the Company’s charitable funds, a role he takes on when elected Foreign Warden and gives up when becoming  Immediate Past Master.  The Company distributes approaching £70,000 per year to selected charities.

In relation to another fundamental function of the Livery, education, one event of particular significance this year was the establishment of an MSc Bursary at Cranfield University, something initiated by the, then Assistant, Colin Bramall (now Foreign Warden) and taken forward by the Chairman of the Charities Committee, Past Master Paul Hoddinott.  The Master concluded the agreement on behalf of the Company when visiting this year’s Farnborough Air Show as the guest of the University.

There are significant representational aspects to the Master’s year, examples during the period  covered by this article being: the Annual Defence and Security Lecture hosted by the Lord Mayor, this year’s speaker being the UK Chief of the Air Staff, the Shrieval Elections where the Master processes and votes with fellow Masters in Common Hall, and then, with the Mistress, joins other members of the Company for lunch and the Annual Aerospace Graduation Ceremony at Cranfield University, where the Company awards three prizes.

The Master, as a guest of the School Governors (the Leathersellers’ Company) joined their Annual Visitation to Colfe’s School, the Master’s alma mater. He attended a wine tasting lunch with Berry Brothers and Rudd, joined by the Immediate Past Master and the Learned Clerk. He attended a First World War Remembrance Reception with other Masters at the London Scottish Regiment’s drill hall.

As well as joining the Master as indicated above, the Mistress was also the guest of the Mistress Mercer at Mercers’ Hall, learnt about beekeeping in the City of London with the Wax Chandlers’ and, with a small selection of other Consorts, attended a private luncheon with the Lady Mayoress in the Mansion House.

As for formal dinners, the Master was the guest of the Innholders’ and of the Leathersellers’  and with the Mistress guests at the Mansion House of the Lightmongers’. Having chaired the July Court meeting the Master then hosted a Court dinner, the choice of venue being that of the Master – he selected Armourers’ Hall and his guest speaker was William Hunt, previous Windsor Herald.

This period started with an outstanding visit, and concluded with another.  The Master organised and led a visit to the Fan Makers’ affiliated RAF unit, No. II (Army Cooperation) Squadron, now based at RAF Lossiemouth, and very recently returned from active service in Eastern Europe. On Friday the Squadron focused on the Fan Makers, including all of them ‘flying’ the Typhoon simulator, followed by an informal dinner with the Squadron Officers.   Then on the Saturday, attending a Squadron Families’ Day where the Master presented a new and permanent “Airman of the Year Award” to Corporal Cook, an award voted for by the winner’s peers, and produced from part of a wooden propeller (a fan!) from a World War One Royal Flying Corps Bristol Fighter.  The following photographs are courtesy of Liveryman Colin Edwards. 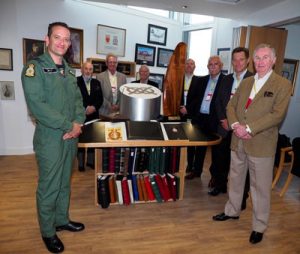 The Squadron ‘Boss’, the Master, the Fan Makers Team, and the Award, in the Squadron History Room. 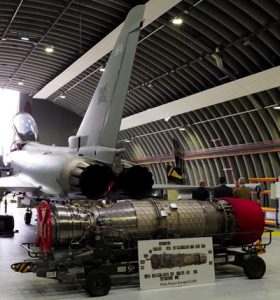 The Eurojet EJ200 aero-engine, one of the two fitted to the (modern!) Typhoon and, together, generating 120 kN of thrust dry, and 180 kN with afterburn. A serious modern fan! 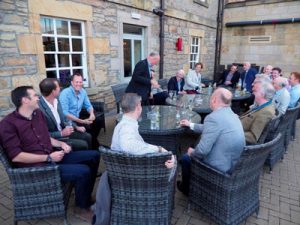 Pre-dinner drinks. Well, what did you expect, this is the RAF and the Fan Makers after all! 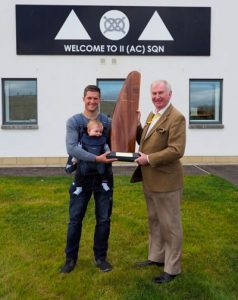 The 2018 award winner, Corporal Cook (with his next generation aerospace engineer!)