A Master’s year: part one

This article is the first in a series in which Dr Michael Smith describes his year as Master Fan Maker.  The series runs from February to February, and features the February, April and October Court Dinners, the June Summer Dinner, and the December Banquet at the Mansion House.  Of course the activities of the Mistress Fan Maker are also included!

The February Election Court Meeting started early at 2.45 p.m.  There was much business to cover.  As always this meeting began chaired by the outgoing Master – Marshall Blaker. Again as always, the election of the Company’s officers began with the choice of a new Master who then took the chair and presided over the remaining six installations, at the end of which he bound two new Apprentices, and admitted a Freeman and a Liveryman.  The meeting concluded with a Court photograph taken in the Skinners’ Courtyard. 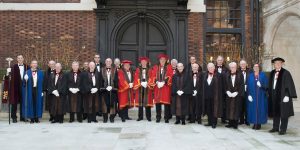 The Court then processed to St James Garlickhythe Church for the Company’s Election Service which was led by Father Tim Handley with our own Chaplain, the Reverend Canon David Reindorp, preaching the Sermon.  The organ was played by previous Lord Mayor, Sir Andrew Parmley, and the Lesson read by the new Master.

The Reception before dinner was the setting for the transfer of the Mistress Fan Makers’ brooch and fan to the new Mistress – from Philippa Blaker to Jennifer Smith. Then there was a humorous slip of the tongue by our Beadle, James Hasler, when calling guests into dinner. Promptly and ably corrected, the outbreak of mirth set the scene for a relaxed and enjoyable evening for all present in a Skinners’  Hall full to capacity.

The highlight of the evening was provided by the Principal Guest and Speaker, David Pitchforth, a long-time business colleague of the Master.  David is an engineer from Yorkshire who started life designing wind tunnels. He later moved into the automotive sector in the USA, eventually becoming the Managing Director of Jaguar Formula 1. He then took his skills into aerospace becoming the Managing Director of Boeing Helicopters UK, and at the beginning of 2018, the President of Boeing Defense, Space and Security Global Operations.  David’s speech centred on fans, in all their guises, encountered in his career to date.  Except that is in Formula 1 racing cars – fans are not fitted in these machines which is why they can overheat on the grid but, as David pointed out, they do surround the circuit as spectators!

As explained in the Master’s speech, the evening was intended to focus a year on the modern fan, especially in aviation, but during which we will not forget the origins of our company, the ladies’ fan.  Hence, the ‘lady’ on the back of ‘350 Years and Beyond’, the Mistress Fan Makers’ hosting of consorts at the Fan Museum on 21st May, and a similar event at the Vintners’ Hall in September when swan-upping will be the theme of the lunch.

22nd. February was followed by a flurry of invitations to the Master and Mistress, sometimes together, sometimes apart, with the Master often accompanied by the Learned Clerk.  The first was of particular note, it was from the Master Gunmaker at the Proof House outside the City in Commercial Road where, along with their colleagues in Birmingham, the Gunmakers “proof” all weapons up to 20mm in calibre.  Before lunch we were privileged to be conducted on a tour of the premises by the Proof Master, Richard Mabbitt, an extremely experienced ex-Military armourer. And then, a very definite ‘touch’ – lunch commenced with the firing of a cannon, in the garden of course!

Another invitation was from the Master Mariner himself, with the First Sea Lord as the Principal Speaker, the venue being HQS Wellington on the Thames. We think of the Master’s badge and chain as of serious value, and so it is; but the Master Mariner has a badge of office a league apart.  It was designed for King Edward VIII when he was Prince of Wales and the first Master Mariner.  It is encrusted with precious stones and so valuable that, whenever it is worn, before the Master Mariner can return home, he must first return the badge to the Honourable Company’s safe.

A very memorable invitation came from the Court, Council and Senate of City University, where the Rector is the Lord Mayor, to attend their annual Court Meeting, conducted by the Chair of Council alongside the Rector and the President.  For the Master, who is an alumnus of two Universities, of a Military Staff College, and has been a Council member of our affiliated University, Cranfield, this was most evocative and interesting, particularly as one of the speakers focused on Formula 1, an integral part of the Master’s business life.

Another invitation was to join the Lord Mayor of Westminster when he hosted the annual luncheon with the Lord Mayor of the City of London; and yet another was to lunch with the Apothecaries Company in their Hall, the oldest standing in London and, as the Learned Clerk with his eye for the armorial pointed out, full of fascinating coats of arms.  This Hall was also the venue for a luncheon with the Spectacle Makers, one of the Livery Companies in the ‘circuit’ that includes the Fan Makers.

There were other most welcome invitations.  For example, from the Chairman of the Reserve Forces and Cadets Association of Greater London to attend the Lord Lieutenant’s Awards Ceremony, something close to the Master’s heart as an Air Training Corps Cadet Warrant Officer from the 1960’s.  And from the Chartered Secretaries and Administrators to attend a lecture by the Rt. Hon. the Lord (David) Willetts, the former Minister of State for Business Innovation and Skills, on the importance of higher education and how the City could assist.  Followed, of course, by supper!

Two more invitations which particularly pleased the Master, because they were from the Fan Makers’ ‘circuit’, were from the Master Gold and Silver Wyre Drawer, and the Master Maker of Playing Cards.  It is a small world, but over 30 years ago it was the then Master Playing Card Maker, a full General and President of the Honourable Artillery Company, who introduced  the Master, then a Wing Commander at the Ministry of Defence, to the City and the Honourable Artillery Company.

Then there was an invitation no Master and Mistress could ignore, from the Lord Mayor and Lady Mayoress to dine with the Aldermen, Sheriffs and fellow Masters or Prime Wardens at the Mansion House, so that the Lord Mayor could lay out his plans for his year.  One point that caught the Master and Mistresses’ eyes immediately was the cover of the menu card.  It was a painting of the Lord Mayor’s procession in 1888, and that Lord Mayor was Sir James Whitehead – a Fan Maker!

This banquet was followed the next day by the United Guilds Service in St Paul’s Cathedral.  This year the Master, with his fellow Masters of similar seniority, was privileged to process with the Lord Mayor. Luncheon followed with the Skinners’ Company and the Management Consultants at our home, Skinners’ Hall.

During the period covered by this article the Mistress Fan Maker received many invitations in her own right. By way of example, from the Shipwrights to a champagne tea at Trinity house, to a tutored wine tasting and luncheon with the Plaisterers, to a turning demonstration at the Hurlingham Club with the Turners.  And then there was one invitation to both Master and Mistress that was very close to home.  To attend the Annual Civic Luncheon of Cripplegate Ward Club on the installation of their new Master, Mary Nurse, a Liveryman of the Fan Makers.

There was a very much appreciated invitation to attend the Gloriana Achievers’ Day where young people from schools within London boroughs along the Thames learn to row, then compete against each other. The two winning teams are allowed to row Her Majesty’s Royal Barge ‘Gloriana’. Everything was conducted under the watchful eye of Sir Steve Redgrave who presented the prizes.  The Master is delighted to announce that the school crewing the Fan Makers’ skerry not only won the time trials, but also their race, so they helped crew ‘Gloriana’ herself.

As well as all that, during this period there were several committees to chair or attend as an ex-officio member –  the General Purposes and Finance Committee, the Livery and Recruitment Committees.  But the most important ‘committee’ to chair was the Court itself on 19th. April which was followed by our dinner celebrating the Royal Air Force Centenary, the Principal Guest and Speaker being Air Chief Marshal Sir Andrew Pulford, Chief of the Air Staff from 2013 to 2016.  His speech, uniquely in the Master’s experience of nearly 200 City Dinners, brought a standing ovation.  But that is for the next article.