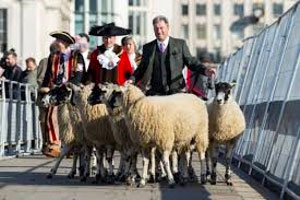 After the summer break, business as usual commenced in September with a General Purposes and Finance Committee meeting.  Other work that month included the Livery and Recruitment Committees, and the production of a suitably fine fan for potential presentation to a lady member of the Royal Family.  The highlight of the month for the Mistress Fan Maker was hosting a superb luncheon in Vintners’ Hall featuring a presentation on Swan Upping, the annual census of swans on the Thames.  Only two Livery companies are involved: the Dyers and the Vintners.

From fowl to livestock, on Sunday the 30th of September, the Master with the Clerk and many other Freemen of the City of London, shepherded sheep across London Bridge, an occasion organised by the Woolmen’s Company which raised thousands of pounds for charity.

The Drive was led by Alan Titchmarsh and the Lord Mayor, Alderman Sir Charles Bowman. 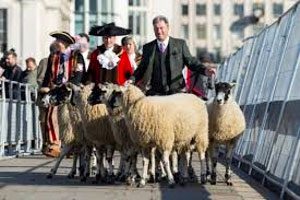 October opened with the most important event in the City calendar, the election of a new Lord Mayor, Alderman Peter Estlin, 691st Lord Mayor of the City of London.  Unfortunately, he was overseas representing the Country and the City when we held our Annual Banquet in the Mansion House in December. However, he was to be very well represented by Alderman Sir Andrew the Lord Mayor during 2016/2017. The election of the new Lord Mayor was followed by the Master and Mistress lunching with the Master and Mistress of the Barber-Surgeons’ Company in their beautiful Hall.

As the month progressed business continued.  Importantly, the selection of a fan for the new Lady Mayoress, Lindy Estlin, a meeting with the Gilders, Campbell Smith and Company and, with the two Wardens, interviewing candidate Liverymen. Later, chairing the Court Selection meeting and hosting the dinner that followed, our principal speaker that evening being another colleague of the Master, Sir Michael Arthur KCMG, President of Boeing Europe, and formerly Her Majesty’s High Commissioner to India and Ambassador to Germany.

Not surprisingly there were many lunches, dinners and receptions to attend. For the Master, with the Lightmongers’, Solicitors’ and Fuellers’ Companies, the latter being an installation evening; and with the judges at the Old Bailey as the guest of Sheriff The Hon. Elizabeth Green. For the Mistress, with the Chartered Accountants’ and Tallow Chandlers’ Companies, and Champagne Tea with the Bakers’ Company.   Additionally, the Mistress was given “A Glimpse Behind the Scenes of the Victoria and Albert Museum” at the Farmers’ Club, hosted by the Woolmens’ Company; and a private tea for small number of consorts in the Lady Mayoress’s personal apartments.  Additionally, for the Master there were lectures with the Horners’ and Distillers’ Companies, and a debate arranged by the new Guild of Entrepreneurs.  Finally, with the Clerk, the Master attended the launch of the latest City book, The Livery Halls of the City of London, at the Mansion House.

Together, the Master and Mistress attended their second art exhibition of the year with the Painter-Stainers’ Company; and evensong in St Paul’s Cathedral – twice – first as guests of the Dean, and then as guests of the Musicians’ Company. They also attended: the Remembrance Service in St Paul’s Garden of Remembrance; the Silent Ceremony in the Guildhall, when the outgoing Lord Mayor hands-over to the incoming Lord Mayor; the Lord Mayor’s Show the following day; an exhibition of wood turning with the Turners Company; the annual banquet of the Environmental Cleaners’ Company and a reception with the Barber-Surgeons’ Company which included a talk on barbers’ poles.  One very important event for both the Master and Mistress was the presentation, on the 22nd of November, of a fan to the new Lady Mayoress, Lindy Estlin who was accompanied by the Sheriffs’ consorts.

December saw the pace of events start to slow down for the end of the calendar year. Accompanied by the Clerk, the Master attended the Lord Mayor’s address to the Livery and the City Corporation where, this year, a new format was adopted: the Lord Mayor was accompanied by the Town Clerk (Chief Executive) who, together, were ‘interviewed’ by the Chairman of the City Livery Committee.  This was followed by a Reception hosted by the Chairman of the Lord Mayor’s 800th Anniversary Awards’ Trust to honour three very successful teams of young people; and then, joined by the Mistress Fan Maker, a menu tasting behind the scenes at the Mansion House in preparation for our annual banquet. The carol service, jointly with the Fuellers’ Company, at St James Garlickhythe Church took place later in the month, as did a dinner with the Turners’ Company in the Saddlers’ Hall.  In between was a Thanksgiving Service for the outgoing Lord Mayor at St Stephen Walbrook, a Sir Christopher Wren ‘domed’ church.

The highlight of the month, however, and certainly a high point of any Masters’ Year, was the annual banquet in the Mansion House during which the Master presented a cheque from the Company to the Lord Mayor’s Appeal.  The Banquet was attended by almost 250 Liverymen and their guests including the Lord Mayor (locum tenens) Sir Andrew Parmley and Lady Parmley, the Sheriffs and their consorts as well as many Masters, the President of CIBSE and their consorts.  The Master took advantage of the evening to review, very briefly, some of the principal activities of the Fan Makers’ year and to thank those involved.  Silk scarves, in the Fan Makers’ colours and bearing the Coat of Arms, had been specifically designed and produced for the occasion, and were presented by the Master as a Christmas gift to all the ladies present. Such scarves can now be purchased from the Clerk.

The Guest Speaker for the evening, in addition was to be Professor Dame Ann Dowling OM DBE FRS, President of the Royal Academy of Engineering.  This was in keeping with the Master’s support for ‘2018: the Year of Engineering’. Unfortunately, having prepared most carefully, Dame Ann succumbed to a highly unpleasant and infectious virus just 24 hours before the event.  However, to our delight (and relief!) the Chief Executive of the Royal Academy of Engineering, Dr Hayaatun Sillem, was able to stand in at the very last minute and speak most authoritavely on behalf of her President, her Academy, and the Nation’s engineering initiative. 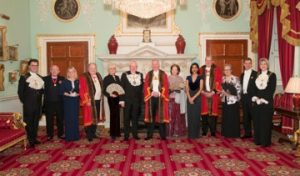 The fifth and final part of this ‘Master’s Year’ will follow at the end of Michael and Jennifer’s year.