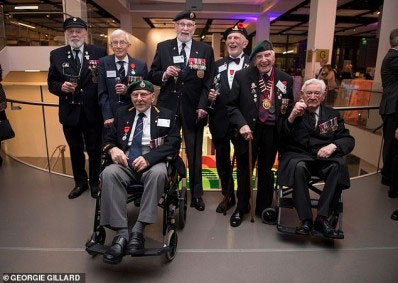 It is often said that the Mansion House Banquet in December is the culmination of the Master Fan Makers’ year. In a sense, it is. It takes place almost at the end of the calendar year, ten months into the Company’s annual cycle, and is undoubtedly a truly wonderful highlight.  Nevertheless, it is not the end.  Five days later the Master attended the Turners’ Banquet at Saddlers’ Hall. During January and February eight more events including Dinner with the Tobacco Pipe Makers where the Master received a box of snuff, the Honourable Artillery Company’s Civic Dinner where the Master was hosted by Past Master Tony O’Hagan, and an outstanding Reception at the National Army Museum in aid of the Normandy Memorial Trust.

Furthermore, the Master and Mistress attended a private viewing of a new exhibition at the Fan Museum and, in the company of HRH The Duchess of Gloucester, another private viewing and reception by the Basketmakers – like us a Company with strong Huguenot connections – in the Guildhall, entitled Weaving the Cycle of Life.

So, a reflection. Of the many important ‘business’ activities during the year, seven in particular stand out.  First and foremost, the Company’s finances are becoming increasingly sound.  This is due to a number of factors, including shrewd management by the specialist Court members concerned, bequests by late members, and a steady influx of new Liverymen.  Second, the influx of new blood is keeping our Livery numbers in the high one hundred and eighties, with additional support from the seed corn of Freemen and Apprentices. Even so we must keep an eye on the unavoidable attrition rate and the recruitment of new members must remain a high priority for all members of the Company, not just the Court.

Third, and staying with finance, our charitable giving continues to increase and, so therefore, the benefit it gives to the organisations we support. All our giving is reviewed most carefully each year. With the importance of charity in mind it is very good to see that an increasing number of Liverymen becoming involved with our charitable activities beyond making the all-important financial donations.

Fourth as well as giving we have received. Through the generosity of the Ross-Collins family, 2018 saw the creation of a Bursary with Cranfield University that will allow one student each year who could not otherwise afford it, to attend an MSc Thermal Power course.  It is the intention that this Bursary should grow and assist an increasing number of students. Fifth, courtesy of the same benefactors, we have established a working group to investigate the support of ladies’ fan making as a ‘Heritage Craft’.

Sixth, also with ladies’ fans in mind, the Company has had designed and had made a new double-sided silk and mother-of-pearl fan for presentation to a lady member of the Royal Family. This exercise has been undertaken in conjunction with the Turners’ Company who have produced a unique wooden case for the fan.  Details will be made available to the Livery once the fan has been presented later this year.

Seventh, all this activity, and more, is now being, or will be, publicised via our recently established Communications Committee who oversee the further development of our newsletter and the maintenance and continuous improvement of our website on which this final article will appear.

To everyone who has been involved in these activities, and in all other aspects of the continuing development and running of the Company – and you are legion – on behalf of all Company members and their consorts, Jennifer and I extend our heartiest “Thank You!”

Turning now to representational and social activities, of the one hundred and thirty -two events that the Master and Mistress attended, some individually, some together, what were the highlights of the twelve months for this Master and Mistress? Each one is recorded in three A4, three-and-a-half-inch thick ring binders. The first must be the Installation Dinner at the very beginning.  For Jennifer and I that was an unforgettable evening, surrounded by family and friends in a Hall packed to maximum capacity. Another was lunch with the Gunmakers at The Proof House where the meal and every speech were commenced with the firing of a cannon!

Then there were all the different venues we visited, occasions we enjoyed, and people we met.

For example: the splendour of The Goldsmiths’ Hall with their magnificent chandeliers lit by scores of candles; dining with the Cutlers of Hallamshire (not to be missed if you ever have the opportunity); touring the Ironbridge Victorian Village during the day, and playing with the ‘toys’ in Enginuity before dinner on the annual Masters and Consort’s trip.

Being rowed in Her Majesty’s Royal Barge Gloriana; shepherding sheep across London Bridge; attending a Buckingham Palace Garden Party; listening to a talk on Swan Upping when Jennifer hosted a lunch in Vintners’ Hall; processing in St Paul’s Cathedral and the Guildhall; visiting the London Beehives, lunching with the Judges in the Old Bailey, conducting a Court Meeting, and then dining, in Armourers’ Hall with the former Windsor Herald. The list goes on.

Indeed, there were so many lunches, dinners, talks, presentations, reviews, receptions, visits, and other events that it is very difficult to choose one from another. They all had their different attractions.  That said, if we were to pick just one each that stands out in our individual memories, Jennifer would say: lunch with the Lightmongers, which included a forty five-minute stunning presentation of Queen Elizabeth I in full costume and make-up, by Lesley Smith, M.Phil, M.Univ (Hons), F.S.A (Scotland), the internationally renowned medical historian and curator of Tutbury Castle. 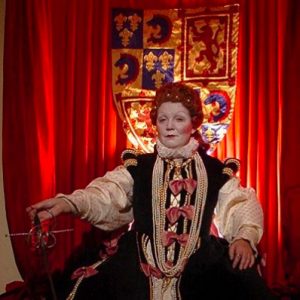 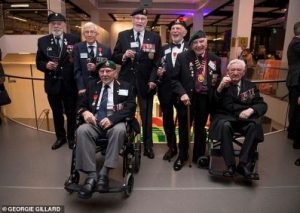 From Jennifer and myself, we can most heartily say it has, for us, been a joy, an honour and, most of all, a privilege to represent the Fan Makers’ Company as Master and Mistress during the year.  We thank everyone most sincerely.  The last word goes to our Honourable and Learned Clerk, who has done us proud. He whispers into every Master’s ear – “Remember, there is nothing so past as a Past Master!”  So, to our next Master, from Jennifer and I say – enjoy 2019/2020 as much as we enjoyed 2018/2019 – and you won’t go far wrong!